Parachutes are an excellent way to develop strength, endurance, and work on team-building skills with younger students. Below you’ll find my parachute team building lesson for K-3, although many of the activities can be used with older elementary students as well. Enjoy!

Today we are going to work as a parachute team.  There is actually a special team of volunteers from all the different branches of our military called the Para-Commandos that do some amazing things to help others by jumping out of airplanes using a parachute.  When teams of Para-Commandos jump out of airplanes with parachutes they must have everything done correctly and work together to keep everyone safe.  Today we will not be jumping out of an airplane, but we will be working together as a team to play some fun games and perform some amazing activities with a giant parachute.

(team always responds together as one voice at the same volume as the leader, all movement and noise stops, and eyes on leader)

Leader says – Freeze…….students respond by stopping all movement and holding parachute still, looking at the leader.

Students shake the parachute at waist height and on the word “Freeze” hold the parachute absolutely still.  Pretend to test to see if the parachute is strong enough and if we have the teamwork to move to the next mission.

Students work together to lift up the parachute on the leader’s command in order to create an igloo.  Students must lift it up together and go under the chute while holding onto it.  They must then sit down on the chute.  On the leaders command, students will slide with the chute under their bottoms toward the center at the same speed.  (Once the igloo is made, this is a great time for a short story or further directions about upcoming missions.)

Students lift up the parachute on leaders command. After it is lifted up, leader says “walk in” and students all walk in 5 steps together with hands up.  This will have the parachute form a giant mushroom in the air.  Leader then says “walk out” after holding the mushroom for a few seconds. Try to make several successful mushrooms in a row.

On leaders command “up,” all students lift parachute up and then lower to belly level and shake it with both hands.  While the parachute is up, the leader calls out one of the colors of the parachute.  Everyone on that color must squat down and walk under the chute following the color and exiting the exact opposite side of the parachute. The parachute is shaking like bats are flying over their heads.  Students must walk (no running allowed) with hands out in front to make sure they do not bump into anyone else. Once a student exits the chute on the opposite side, they must turn to their right and return to their original spot going around the parachute clockwise.  After all students are back at their spots, the leader can call a new color.

Same thing as Bat Cave Exploring, except after raising the parachute up students bring the chute to the ground and kneel on it.  This makes the parachute into a giant mountain.  The leader than calls a color and those students must cross the chute on the top of it and exit on the opposite side.  Students must walk slowly and carefully, trying to stay only on their color as they cross.  If a student falls or touches their knees to the ground, they must do 10 jumping jacks right where they are and then continue to cross.  After exiting the parachute, students again turn to the right and return clockwise to their original spot.  Once both Bat Cave Exploring and Mountain Climbing have been taught they can be used as a game mixing up which one is called to make students listen and problem solve what they need to do.

On leaders command “up,” all students lift the parachute up and then hold it up over their heads tightly with both hands.  While the parachute is up, the leader calls out one of the colors of the parachute.  Everyone on that color must go under the parachute and dance (playing music during this time makes this activity much more fun).  As the chute begins to lower the dancing students must try to raise the roof with their hands as they dance.  When the music stops (usually 15 -20 seconds), students must exit quickly to their original spot.  This same procedure is done for each of the colors.

Game Rules:  Place five large stuffed animals on the parachute.  All students pick a stuffed animal and point to it.  Leader uses commands to “POP” the parachute and the animal that flies the highest is the winner.  If a student picked the winning animal, they get to skip around the parachute celebrating as a victory lap.  If a student did not pick the winning animal, they must perform 3-5 push-ups and get ready to go again.  Students must then all pick a new animal and point to it.  After everyone has chosen a new animal the leader has the team “POP” again and this repeats over and over.

Four students sit on the middle of chute and the rest of the students run around the circle holding the parachute and making the 4 students turn like on a merry-go-round. Trade jobs so all students get a turn to ride.

Students lift up the parachute as high as they can reach on the leaders command and then step forward two steps toward the center. After it is lifted up, the leader says “let go” and students all let go of the chute.  Students must then stand still like their feet are glued to the ground.  The parachute will float and land on some students.  The object of activity is to test the self-control of students to see if they can all stand still like a manikin until the leader says to move and grab the parachute again.

Students on their hands and knees under a large “turtle shell” and try to make the turtle move in one direction. Students have to work together to get the turtle to move.

Three students are chosen to be sharks to go under the parachute.  Two to three students are chosen to be lifeguards and must back away from the parachute.  All other students are swimmers sitting down with legs under the chute and holding it with both hands, shaking it like waves in the water.  If a shark grabs the ankles of a student, the student must let go of the parachute, lay back reaching their hands up, and call for a lifeguard.  If the lifeguard does not get to the student before their head is pulled under the parachute, then they will become a shark too.  If a lifeguard does get to them and begins pulling them out, the shark must let go and move on to attach another swimmer. 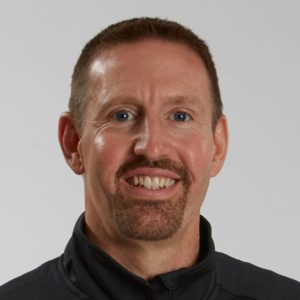 Tim Mueller has taught K-8 physical education at Erin School since 1992. He is a national presenter and was named the 2016 Wisconsin and 2017 SHAPE Midwest Middle School Teacher of the Year. He is an adjunct professor at Concordia University - Wisconsin, instructing the Methods of Teaching Elementary and Secondary PE courses. Tim is passionate about helping teachers create a positive learning environment for all classes. He believes, “Good rapport with your students is a choice you make every day!”
View More Author Articles