I asked my K-8th grade students to share a list of the best Physical Education basketball games for kids that we play. Below are their top five picks, including a video demonstration of each!

Around the Gym Knockout

This fun basketball game for PE is played just like the original knockout game, where you try to get the person in front of you out by scoring a basket before them. However, in ‘Around the Gym Knockout’, when you are eliminated from one goal you move on to the next goal and join that game. In our gym, we use four to six basketball goals at a time. To start the game, we divide up among the goals and each goal is treated as a separate game. Students enjoy this game because they don’t have to wait till the end of the game to keep playing. Once eliminated, they move on to play with a new group of students at the next goal.   Check out Around the Gym Knockout in action!

Evenly divide your students into 6 lines; each line has their own basketball. It’s best to color code your equipment in this game to avoid confusion as seen in the video. On the whistle, the first person in each line takes one shot from their cone. If the basket is missed the students quickly rebound their ball and shoots from everywhere until a basket is made. The first of the six people to make a basket is safe and returns to the end of their line, while the others are out. Once out, the only way back into the game is if your teammate makes the first shot from the cone, all players from that team rejoin the game. **House Rule** If there is one player remaining from a team and they make their first shot by the cone, all players eliminated are back in the game regardless of their team color.

Scatter cones all over the gym floor, various sizes if available. On signal students dribble around the gaming area tipping or set up cones on the various signals, then switching out with the next person in line. Variation: have two groups of students each with different jobs, picking up or tipping down cones. Check out the Dribble Tip Over basketball games for PE in action!

Scatter polyspots on the gym floor surrounding the basketball goals. On the signal, a student in front of each line passes the basketball over their head to the person behind them. The line continues to pass over their head until the last person in line receives the basketball. The last person then dribbles to any poly spot on the floor and shoots the basketball. If the student makes the shot, they pick up the poly spot and bring it back to their line. While the person is shooting the line moves back to make an empty spot at the front of the line for the shooter to start passing the ball overhead when they return. When all the poly spots are taken up, the game is called and a point value is given to each different colored spot (Don’t give point values to the spots until the end, so students will focus on shooting not adding spots). Have the teams add up their spots, and the line with the most points wins the game.

Get four balls in a row by passing and shooting in this strategic, fast-paced basketball games for PE of Gopher’s ACTION™ 4-Point Play! Place the goal at one end of the play area and create a shooting line in front of the goal. At the signal, two players from each team start at the other end and work together to advance a ball towards the goal by dribbling and completing at least four passes before shooting. If the player misses the shot, players rebound the ball and try again. If the shot is made into the goal, the next pair of players take their turn. Teams collect points by connecting four basketballs in a row! The team with the most points after all 42 balls have been scored, wins! Dribble, shoot, and score big when you get four balls in a row! 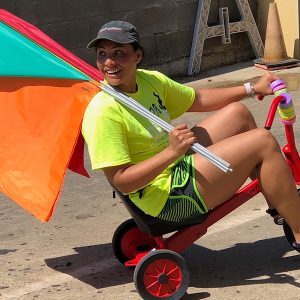 Shannon is a PreK-8 Physical Education Teacher, Coach and Athletic Director in Fort Worth, TX. She is an experienced Presenter and the winner of the Best Activity in America Contest in 2010.
View More Author Articles