I’m excited to share some of my favorite PE flag games! I’ll expand on 3 different categories of evolving Physical Education to offer you some new activities, new perspectives, or a twist on some of the more traditional activities. Let’s jump in and take a look at a traditional, strategy/co-op, and fitness/duo types of programming that involve the use of flags in rather creative or non-conventional ways.

What would a list of flag activities be without flag football? Everyone has his/her own variation on teaching this “classic”, so I wanted to include a great lead-up game. After teaching skill, positions, and terminology, we always use a lead-up game called “Flag ‘n’ Tag” before we launch into the actual modified flag football games.

Objective: Pull opponents’ flags and avoid having your flag(s) pulled.

How to play: Give students 2 flags and divide the class into groups of your choice. Instruct students to stay within a pre-determined circle, typically the size of the center circle on a regulation soccer field. Or, make this a small-sided game by using multiple, smaller circles and smaller groups.

This is an “Oldie but a Goodie” because ALL age groups love to play Capture the Flag; but, we’ve added a fitness twist!

How to play: Set up the traditional components of Capture-the-Flag:

Next, give each student a flag belt or set of flags. The twist here is that not only does the team have to defend its team flag, each player also needs to defend his/her own flags when he/she enters the opponent’s side. If an opponent pulls a player’s flag, the player then visits the jail until rescued or the game flag is successfully recovered by a team.

The second twist is an added fitness component. Ensure your students are always on the move by creating a “house rule” that they must be engaged in activity at all times, including students in the jail area. They can easily jog in place, perform sit-ups or push-ups, or do jumping jacks. If you notice any lag in movement, warn the team and then penalize them by moving their flag/cone closer to the middle of the playing area.

This is a flag game that can be played just about anywhere, which is a great “sponge” activity to have in your adaptability repertoire. Partner Tag is great for small, moderate, and large classes too!

How to play: Divide students into pairs and give each student 1-2 flags. One student is deemed the “Runner”, while the other student is the “Chaser”.  Their objective is simple, yet challenging. Students play tag, just the 2 of them, and should ignore everyone else (aside from avoiding collisions with the other pairs).

Once you designate the playing area, direct the students to get back-to-back and blow your whistle to start the game. On the whistle, the runner takes off while the chaser spins around 3 times.  Once the chase spins 3 times, he/she is free to chase ONLY his/her partner. Once the partner’s flag is pulled, the runner must spin 3 times, pick up his/her flag, and begin to chase his/her partner back.

Variations: Use trios instead of pairs for a fun (and more complex) twist. If you have a smaller space, invoke the “heel-to-toe” rule. This means students CANNOT run, they must only move in a heel-to-toe fashion (speed walking) to chase their partner.

Well there we have it, three flag games ranging from traditional (with a lead up twist), a fan favorite with a fitness component sprinkled in, and one progressive flag tag activity. Each of these games focuses on fitness, fun, and fundamentals while utilizing flags. What other flag games do you use in your classes?

If you want to add flag belts to your equipment stash, check out these great options! 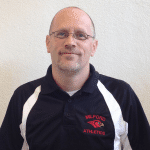 Peter is the Director of Athletics at Milford Public Schools in Milford, MA. Previously he was the Elementary Principal & K-12 Wellness Coordinator in Canton, MA and was the Massachusetts K-12 Wellness Director of the Year in 2011-2012.
View More Author Articles