On today’s podcast, I want to talk to you about one of my favorite pieces of equipment that utilizes technology and helps students measure their personal activity levels during PE class.

You know, one of the things that I always wrestled with as a teacher was that quote/unquote effort and participation grade that I needed to give on my district’s report card. I just hated doing that because I never had any measurable concrete data. For me it was just really subjective. I mean, as a teacher, you’re basically observing students all day as you work with them. So if a student never chose to sit out during a grading period, do I automatically give them the highest grade? You know, how do I grade kids that stand around more than let’s say some of the more athletic students, you know, how do I justify my own perceptions to a parent if they are asking me questions about it if I don’t have any data to share with them. So for years and years, I experimented with all kinds of rubrics and different methods to quantify what effort and participation looked like in my class, and then I even had to break it down further to differentiate that into different levels that corresponded with my district’s grading scales. So I mean it was a mess. I mean I tried step counter pedometers. I even had some expensive heart rate monitor systems, but it was like nothing that I, that I tried really gave me the ease of use and the objective data that I was looking for. Not until Gopher came out with their FITstep pro line of pedometers. I mean these devices are simple enough to use with kindergarten. They track all the activity time students earn while they’re wearing them, all the moderate to vigorous physical activity time so you can see their intensity and of course steps as well. For me, one of the best parts about it was that I can upload my average class size of 25 at the end of PE in less than two minutes.

I mean all the data was collected, it’s stored. It’s readily available for me to either share with students if we’re working on a goal setting thing or to report out to parents or to just help support my grades. I mean and it was easy for all my students to use. I had minimal loss to instructional time, which was, which was a win/win for me. Now, when I first found out about this piece of technology, I wrote a grant to receive funding. I mean I received the FITstep Pros in the middle of the school year. So when they finally arrived I was, I was excited to just, you know, tear them open and get them set up and, and get them on the kids. I actually spent the second half of the school year just having the students wear them regularly and I looked at all the data that I collected over the course of those several months and I analyzed the class averages, grade level averages, just to kind of determine a fair and objective way to decide what students’ grades would be.

You know, based on the level of intensity of their activity. You know, I considered the length of my class, which is for me is 30 minutes, you know, the size of my gym space. If you have an outdoor space, obviously you’re going to have higher numbers. If you have a smaller space, um, probably lower, you know, your average class size is going to determine how, how uh, active and how and how much the kids move and then I created a rubric based off of all that data and when the next year rolled around on the fall, I continue to use those FITstep pro pedometers regularly but now my students had a clear understanding of the activity level expectations and how they were going to be graded on the effort and participation portion of their report card. Um, you know, they were in charge of how much they moved and the data tracked on the FITstep pro reflected that. Conversations with parents at grading time, it just became an opportunity to educate them and explain that portion of, of how that portion of the grade was obtained.

Most of the parents were amazed that I had that much data on their kid and you know so it was a great feeling. It just took the guesswork and the subjectivity out of the equation and it just made grading time a lot easier. Now since the FITstep Pros have come out, Gopher introduced the FITstep Stream pedometers that uploads student data instantaneously with Bluetooth. I mean they just touch a button and it syncs with the computer. I mean, this is, this is gonna save even more time. You know, you don’t have students waiting in line to upload their pedometer at a data reader docking station like the fits that pros require. Now, I know that funding and or access to technology or your class schedule or a number of other things can, can oftentimes be roadblocks to overcome when you’re wanting to implement something like this. But if you want something bad enough, you’re gonna find a way to get it, period.

You know, I got shot down the first time I wrote a grant, but the second time I got it. So, you know, I begged and pleaded for an extra computer that I could just dedicate solely for the use of the pedometers and I finally got one, you know, so it is possible, but only if you want it bad enough to do. You gotta do whatever it takes, you know, to make it happen for your kids. Now if you’d like more details on Gopher’s complete line of pedometers, you can find them on the website, Gopher’s website and I’d also love an opportunity to connect with you and discuss how I used the pedometers in my program. Just check out the show notes and details on how to reach me and I’ll see you soon on another episode of the PE Express podcast. 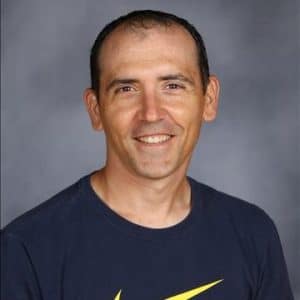