Olympic Bars: Anatomy and How to Compare

Understanding the differences between Olympic bars can be difficult considering the availability of bars on the market today. Even if it’s easy to understand what the bar is used for, it’s difficult to determine what the different specifications are saying about the bar’s quality and performance.

For the purposes of this article we’ll refer to weightlifting bars as those used to perform the Olympic lifts.  The snatch, clean & jerk. They have rotating sleeves, diameters between 28 and 28.5mm, and Olympic knurl marks. Examples of these include our Mesabi Hybrid Bars, Cuyuna Hybrid Bars, and Mesabi Elite Bars.

Let’s break down the common specifications related to Olympic bars and what they mean for users.

Commercial Olympic Weightlifting Bars should have the following characteristics:

A PSI rating of 170,000 to 190,000 is appropriate for commercial settings. Anything below that value is subject to quality issues in the short-term and long-term.

Many weightlifting bar manufacturers and sellers market their product using weight capacity.  Often you’ll see Olympic bars with capacity ratings from 1000 to 2000 lb.  Capacity is a bar’s ability to withstand static loads of up to this figure before taking on permanent deformation.  So if a bar has a 1500lb capacity, that would mean the bar could be placed on a pivot point like a box or bench, and loaded with up to 750lb on opposing sides before permanently deforming.

Bar capacity, however, is not a quality metric when determining bar quality for several reasons.  The first is that the test outcome is largely dependent on the size of the pivot point.  A wider pivot such as a plyometric box will create a higher static test result than a narrower bench.

Additionally, the static test doesn’t translate to the dynamic nature of barbell use.  Barbells, particularly Olympic bars designed for weightlifting, are not used statically.  The Olympic lifts, as well as the power lifts, are performed at speed which creates dynamic forces that can render a static capacity inconsequential.  There is a correlation between static strength and dynamic strength, but it doesn’t tell us everything.  Tensile strength is a more appropriate measure of longevity.

Oilite bushings such as those in our Mesabi and Cuyuna Hybrid bars are self-lubricating.  They’ll provide adequate sleeve rotation for nearly any facility, and require very little maintenance.

Weightlifting bars featuring needle bearings exhibit superior sleeve rotation to that of bars with bushings. The needle bearing provides a high-rpm sleeve that is commonly found in competition Olympic bars.

Are Bearings Worth the Price?

For most commercial settings a bushing is the most reliable option and won’t sacrifice performance for nearly all users regardless of skill level. A needle bearing is the commonly accepted standard for competition Olympic bars and are ideal for high-level weightlifters.

Knurling is the texture Olympic bars exhibit that allow the user to maintain a firm grip during weightlifting exercises.  The depth or aggressiveness of a weightlifting bar’s knurl depends on the specific sport a bar is intended for.  Olympic bars designed for weightlifting exhibit a lower-gauge knurl than powerlifting bars and often feature a center-knurl if intended for competitive use.  The center knurl provides firmer contact with the bar when catching cleans and squatting.

Both the IWF and IPF stipulate that a bar used in competition must fall between 28mm and 29mm in diameter.

The diameters of Olympic bars highly influence their whip (degree to which the bar oscillates under dynamic load).  Smaller diameter bars feature greater whip while larger diameter bars exhibit less whip.  The natural oscillation of heavy loads when using 28mm Olympic bars is desirable as the natural change in momentum often assists weightlifters in standing up the bar from the bottom of the clean.

Powerlifting bars are designed to be more rigid as bar bend is not preferable during heavy deadlifts. Greater bar bend can make it more difficult for the user to break the ground on their initial pull. Whip or bend is also unfavorable in the back squat as the momentum change can throw off the mechanics of a heavy competition squat.

Hybrid bars feature a 28.5mm diameter as they’re intended to be effective as both a weightlifting bar and a powerlifting bar.  They exhibit the balanced characteristics of both bars and are an ideal all-around solution for most weight rooms.  Please note that regardless of what weightlifting bar retailers might say, bars with similar diameters have similar flex or whip.  It’s false to indicate that bars of equivalent shaft diameter and steel alloy will have differing levels of whip under load.

The IWF and IPF both have standardized 2.2 meters as the appropriate length of a competition bar.   Most training bars and all competition bars follow this standard which converts to just over 86.5”.

The finish refers to the plating or lack thereof on Olympic bars.  The finishing process has a significant impact on the longevity of a bar. Ultimately, untreated steel will oxidize and take on a patina. This negatively impacts the durability and performance of the bar. Coating the bar reduces the knurl gauge, but typically not to an extent that performance is significantly affected.  Let’s take a look at the different types of finishes and their benefits:

Bare weightlifting bars are the least resistant to corrosion. There’s no plating preventing oxidation of the steel.  More importantly, they offer an excellent grip due to the lack of protective plating dampening the knurl gauge.  These bars can be a great personal option or for those who desire a stronger knurl.  However they will need to be consistently maintained in a commercial setting.

Black oxide is a thinly-layered protective coating applied under 400 degrees Fahrenheit. The thinner coating makes the Olympic bar resistant to oxidation, without altering the chemistry of the steel. Knurling will be more pronounced as a consequence but these bars will not be as resistant to oxidation as a zinc or chrome coated bar.

Zinc is a fairly common coating for commercial weightlifting bars due to its high resistance to oxidation.  It’s available in both a bright silver or black finish, and has a greater scratch resistance than oxide finishes.  Overall, zinc provides an outstanding combination of durability, appearance, and performance.

Commercial Olympic bars are often given a chrome finish as the chromium will make the bar highly-resistant to oxidation. It’s a stronger finish than zinc or oxide, providing greater resistance to both oxidation as well as scratches from contact with a rack or plates.  Chrome is often the plating of choice for competition Olympic bar manufacturers for it’s outstanding durability and bright silver appearance. The downside to chrome is that it has the tendency to dampen the knurl of a barbell as it applies thicker than zinc or oxide.

Purchasing an Olympic bar can be a challenge.  Yet hopefully you can make an informed decision now that you’re armed with knowledge to properly compare and contrast Olympic bars!  To check out some of our best bars, take a look at the following: 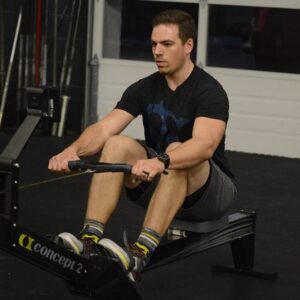 Alex Peterson CSCS, USAW, TSAC-F is the Brand Manager for Gopher Performance and a lifelong strength coach. With a decade’s experience helping athletes of all ages improve their physical preparedness Alex has a deep understanding of what coaches and trainers need to be successful. He enjoys leveraging his experience in the trenches to develop innovative products and provide useful content that meets the unique needs of strength coaches in all capacities. Some of his favorite products that he’s developed have been the VariBlocks Foam Pulling Blocks, ReadyArmor Weight Vests, Varisafe Indoor Weight Sleds, and the AlterForce Sandbags.
View More Author Articles