[0:28] Right now, there is more angst and trepidation in the field of Physical Education and education in general than I can ever recall and it’s not just teachers. It’s parents, students, administrators, and the public. Everyone is just on edge because of the unknown. And with all this unknown, I thought I’d focus on something that we can all work towards regardless of the model that your school comes back with.

[0:56] Whether you’re virtual or if you’re hybrid or if you’re face to face, relationships are going to be paramount during this time. As they are always. Last spring, we had the luxury of already having some type of relationship with students because you’ve been in school for three quarters of the year, and many of you have had the same students or may have the same students this year. However, early on, it’s gonna be essential to connect with students often. So a mantra for the year could be “connect early and connect often.”

[1:31] And while this idea of connection is probably something that you all would agree with, I think of the idea of how and I don’t have all the ideas, that’s kind of not my goal. I just wanna have some points and some ideas that I’d like to share that I think will help is you move forward. And this is again the one thing you know you’re gonna need is relationships.

[1:53] So, for instance, if your school is sending home packets because Internet is not prevalent or there are spots where internet’s not possible, so you’re sending home packets. Maybe something you could do early in the year, is ask students to draw what they did the most this summer. What have they learned this summer? What did they miss about being in school? Obviously, older students could write about this. They wouldn’t necessarily have to draw. But this information, once they send it back to you, you could look at this and figure out exactly what types of activities they’ve been engaged in, and what they’re missing and get to know your students a little bit better, which will help you address issues as you need to address.

[2:37] So let’s assume that your virtual and that your students have access and your district’s able to get everyone access. One of the ideas that I’ve been kicking around, and I think worked a little bit last spring was challenging students to send you three pictures that shares who they are and they will get creative. Some students will and some will take three snapshots and send them and you won’t know what they are and things, but you could ask them to share a video describing themselves in three words. What that does is that keeps you from getting kids sending you a 25-minute video of who they are. Or you can ask them what they wanna learn this year in physical education. That could be something you do in the packets as well – they draw activities that they want to do. All of these ideas again just to get kids to share who they are and to let you see them in a little different light maybe than you’ve seen them before.

[3:24] Face to face: Obviously, there’s gonna need to be some social distancing and that’s gonna be an issue. But one of the things you could do while they are socially distant, is have them mime their favorite activity again not real sure how equipment is gonna work so they could mime something they’ve done during the summer.

[3:44] Make sure you take notes on that so you could see what students are engaged in. If you’re like me, you are not going to remember this. Mime what they wanna learn and a skill that they didn’t know that they wanted to learn and while they’re engaged in the activities the other thing you can do is get around to them. Ask them questions, ask them about themselves. Again, these are things you probably do normally, but it’s gonna be extremely important right now.

[4:09] The activities I have described here are basically the first step in relationship building, and that is getting to know the other person. One thing I don’t want us to forget about is sharing a little bit about you, not overboard, but pictures of you, your family, your pets, activities you like. Maybe even a video because I think we need to remember, students want to know us as well.

[4:30] These are just a few ideas, and I’m sure you have tons of ideas of how you built relationships face-to-face that you can translate into virtual and e-learning. I’d like to challenge you to share how you’re building relationships early in the school year because we’d love to hear from you. Thrive. 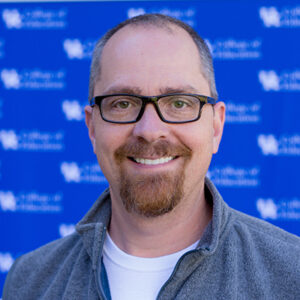