Many sports require athletes to quickly transition from one movement to another, often in response to a stimulus, such as a ball and/or opponent. Therefore, agility has two primary components: physical and cognitive (Gambetta, 2007). Gamble (2010) suggests that many of the most common tests used to measure agility, like the NFL’s “L-Drill” or the NBA’s “Pro-Lane Shuttle,” do not take into account the cognitive component of agility. Instead, pre-planned agility tests involve no reactive decision making by the athlete and are limited exclusively to physical qualities (acceleration and change of direction). Nonetheless, these “common” agility tests do serve as the foundation of assessing agility and performance. (Gamble, 2010).

At Clemson, we incorporate the Illinois Agility Drill to test our athlete’s sport agility. In fact, we use the test because it includes norm scores from which to benchmark and rank performance. Additionally, it requires minimal equipment (cones and stopwatch) to perform.

As previously mentioned, the enhancement of strength and power will improve the control and explosiveness of the athletic movements involved in sport and agility performance. Of particular interest are:

Ultimately, the need to enhance these qualities is illustrated when analyzing agility moments such as changing direction.

Eccentric strength will enhance by emphasizing the ability to “stick” a landing. For example, a Depth Drop/Jump Progression initiates a high eccentric demand in conjunction with body control.

Coaching Tip: A simple test we use to measure force production, force absorption, and asymmetries of the lower body is the Hop & Stop. Originally created by Dr. Paul Juris for the general fitness population in the early 1990’s, it has since been applied to the world of sport as a successful injury prevention screen test. Here is the original abstract of the article published in the Journal of Orthopedic & Sports Physical Therapy.

After absorbing forces through deceleration, high forces are then applied in order to re-accelerate and gain momentum (Young & Sheppard, 2011). Rate of force development plays a major role in re-attaining high velocities.

At Clemson, we utilize velocity based training (VBT) to improve an athlete’s strength and rate of force development. VBT uses velocity as a biometric feedback tool to gauge your weight training on a day-to-day basis. Using velocity to regulate loads is a form of autoregulation in place of a prescribed rep and set scheme based on a 1-Rep Max for an entire month or more of training. Instead, we adjust loads, reps, and sets on a daily/weekly basis based on velocity output.

In fact, the practice of autoregulation helps you target specific qualities and decrease the chances that you over-train. More specifically, velocity output (ex, mean velocity) helps determine how much load you should be adding or removing on a particular set, or if you should move on and try a new exercise altogether. Incidentally, it’s a similar concept to heart rate training zones – stick to a certain training zone and reap the physiological benefits associated with that zone.

Plyometric Training enhances these qualities. Furthermore, many agility movements involve movement in multiple planes. Therefore, plyometrics drills for agility should involve movement in multiple planes. In addition, these movements emphasize pushing off the outside and inside of the foot. This ability to powerfully push off the inside of the foot is essential for fast changes of direction (Jeffreys, 2010).

Newton’s second law states that the rate of change in velocity of an object is in relation to the force applied and is in the direction of the force. Therefore, agility performance is dependent upon not only force-production but also the direction the force is applied. The factors below play a major role in ensuring the force applied is optimized (Jeffreys, 2010):

Ensuring the athletes understands the concepts of proper athletic position and foot placement are essential.

Also, athletes are often unsure when and in what direction they may be required to move making sport agility quite chaotic. Therefore, it is important the athlete maintain a stable athletic position by lowering their center of mass and establishing a reactive base of support. Accordingly, the center of mass is the hypothetical balance point of the body. Be that as it may, in an erect position, it will be at the same point as the center of gravity.

In my opinion, two of my favorite foundation agility drills that emphasize shifting center of mass to create movement and proper base of support are the Low Shuffle Push and the Crossover Stick.

Shin angle, relative to foot position, is an important component of agility performance. When changing direction, the angle of the shin must be placed optimally to allow the force to be applied and expressed in the intended direction. Additionally, the line of force will move from the point of force application (foot on the ground) in a straight line through the athlete’s center of mass. Furthermore, point the foot to allow the line of force to be pointing in the desired direction of movement (Jeffreys, 2010).

As previously mentioned, reaction time and decision-making skills contribute to agility. Additionally, in many sports, athletes must perform movements in reaction to a stimulus, such as a ball or an opponent. However, because game situations develop rapidly, athletes won’t have time to think about what to do. They must react instinctually (Gambetta, 2007).

Accordingly, closed drills are predictable and precisely planned (Plisk, 2008). Additionally, in this pre-programmed environment, athletes know exactly what is expected of them, allowing them to rehearse and optimize movement mechanics (Verstagan & Marcello, 2001).

Coaching Tip: One of my favorite closed drills is the 6-Cone Agility. The cone pattern and spacing suits virtually any sport. Click here to download some agility pattern examples of this universal training tool.

From here on, once the athlete has mastered movements in a “pre-programmed” environment via closed drills, coaches move on to open drills. At any rate, these drills involve reacting to a stimulus such as hand claps, hand/body signals or other athletes (Verstagan & Marcello, 2001). Reactive drills require a higher level of neural processing and neuromuscular coordination (Klika, 2010).

Furthermore, these drills can closely resemble the game environment and should be used to prepare the athlete for competition (Klika, 2010). Presently, the focus is the athlete has to utilize their hard-earned physical strength (and some physics) while simultaneously reacting to unknown, unexpected, changing external stimulus. As a a matter of fact, those combinations are exactly what coaches are looking for when designing and incorporating sport agility training.

dditionally, here’s an example of an open-drill: Paper-Rock-Scissors is an all-time favorite for our staff and athletes. In fact, we do this as part of our pre-game warm-up because it challenges recognition, reaction, agility, mental focus and body control.

To begin, have players pair up, line up on a line facing each other. Secondly, place a row of cones 5 yards on either side of the player line behind each player. At this point, facing each other in an athletic stance, the players will play Rock-Paper-Scissors.

The loser immediately has to turn and run to the cone behind them, while the winner tries to chase and tag his opponent before they can touch the cone. Lastly, if the loser makes it to the cone successfully, he wins the point. Consequentially, If the winner tags the loser, he gets the point. Therefore, first player to five points wins.

Here is a great video of the Citadel Football team performing the Paper-Rock-Scissor open chain agility drill. Coach Donnell Boucher and his staff took this game back with them after a site visit to Clemson this summer.

For more open-chain, cognitive-reactive agility drills, be sure and check out Jeremy Boone’s, Athlete-by-Design: Movement-Based Gamese-book. 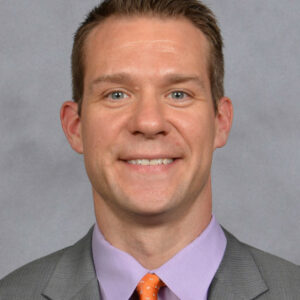 Hired in the Summer of 2016, Mike Bewley serves as Clemson University’s Director of Basketball Strength & Conditioning. Prior to Clemson, Bewley was Assistant Director of Strength & Conditioning for the Yellow Jackets from 2012-16, serving Georgia Tech men’s basketball and men’s tennis. Prior to his appointment in Atlanta, Bewley was a specialist in sports nutrition and strength & conditioning coach at the University of Dayton from 2005-12 for both basketball and golf teams. Before his tenure with the Flyers, Bewley spent 2002-05 as an assistant strength & conditioning coach at Georgia Southern University and implemented programs for baseball, basketball, soccer and volleyball while in Statesboro. Bewley is a 1998 graduate of Eastern Kentucky University, earning a bachelor’s degree in physical education. Bewley earned a master’s degree in education leadership while working as a graduate assistant at the University of Nevada. Bewley’s career doesn’t reside exclusively in athletics. A successful entrepreneur, Bewley has developed several companies that embody his spirt that inspires athletes and coaches to become the best they can be. Bewley’s latest company is the Dynamic Warmup Movement Assessment (DWMA). Built for athletes and coaches, the DWMA is the fastest and easiest way to execute a movement screen in the same time it takes to do a dynamic warm-up. Bewley is also the designer of Nutracarina, an intuitive online platform that seamlessly combines the nation’s top specialists in sports nutrition and sport dietitians with cutting edge technology. Additionally, Bewley is the originator of Critical Reload, nutrition company missioned with providing athletes and teams with safe and affordable sports nutrition solutions.
View More Author Articles