Concepts and Elements of the Movement Education Model Part 2 [Interactive]

[0:03] Hey, everyone today and the PE Express podcast, we’re going to explore the second of four different sessions related to the movement education model within elementary physical education. Let’s get to it.

[0:32] For those of you that haven’t already checked it out, be sure to listen to the first podcast in this series to give yourself a better understanding of what the foundation of the movement ed model is all about. Today we’re gonna build upon those foundational understandings and explore a little bit more in-depth about the different parts and pieces of the movement ed model.

[0:51] So when thinking about the movement ed model and the concepts within it that you want students to gain a better understanding of, think about the acronym B.E.R.S. It stands for a body, effort, relationships, and space. Each of those four concepts makes up one important piece of the movement ed framework.

The Body: Understanding the Body as an Instrument

[1:13] When having your students explore the body as a concept within the movement ed framework, you’re trying to get them to understand their body as an instrument, and it can move either as a whole or in parts. And the question that they’re really trying to answer with their movement is what is doing the action and what action is actually being done.

So the actions that we know they can explore are locomotor skills, non-locomotor skills, manipulative skills, but some of the other elements that they might be able to use to do that more creatively or to express themselves through different body shapes as they’re doing those actions, can they do it in a wide-body shape versus a narrow-body shape? Can they do those actions in a round shape versus a twisted shape or a bent shape or a symmetrical or asymmetrical shape, and getting them to understand those different elements of body shapes might give them a little bit more creativity in how they decided to express themselves while doing those specific actions.

Effort: How is action being done?

[2:06] As far as effort goes, as a concept within the context of the movement and model or framework. You’re trying to get your students to be able to answer the question of how is the action being done? So you’re thinking about getting them to understand the different adjectives they can use to describe the quality of their movements. That’s what you want them to be able to kind of explore here in relation to the concept of effort so you can have them explore time as an element of that concept of effort. So things like speed. Can they do those different movements or actions of local motor skills, nonlocal motor skills or manipulative skills at a slow speed or at a fast speed or a medium speed in between? Can they do it while they’re accelerating and speeding up? Can they do it while they’re decelerating and kind of lessening their speed? Can they also explore how they could do those different movements or actions as a function of force? So can they do those things with a light amount of force or a heavier or stronger amount of force?

Relationships: With who or what is this action being done?

[3:30] As far as relationships go as a concept within the context of the movement ed framework, you’re trying to get your students to answer the question of with who or what is their action being done. So they’re trying to answer that question with their body to have a better understanding on exploring the concept of relationships. So that’s kind of where those propositions come into play or even adverbs come into play and getting them to understand and describe the connections to objects or even other people that they might have during their movements. So they can kind of explore doing things alone, doing those different actions with local motor skills, nonlocomotor or manipulative skills in partner pairs or in groups, and they can kind of explore doing them as a matching pair or group, mirroring where they’re kind of doing the same thing on the same side of the body as they face each other, leading or following one another. Contrasting when they’re doing the opposite or all in unison, doing everything together at the same time. And they can even explore the proposition words where you might kind of go into positioning where you’re trying to have them explore going over things, doing those different actions under or around or through or even other things such as on top alongside, behind, in front, near, or far. So all that kind of comes into play. They explore propositions and adverbs in relation to with who or what is their action being done.

Space: Where is their action being done?

[5:27] So now that you’re more familiar with the concepts and the elements off the movement ed framework, be sure to tune in next time for the third session in this topic series where I’m going to take you through what a movement ed lesson actually looks like. Until then, thanks for listening. See you next time. 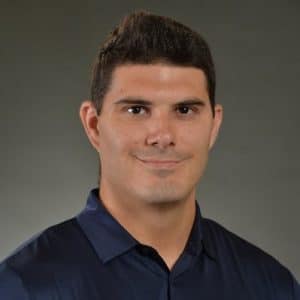 Ross Chakrian has been teaching elementary physical education in Ellicott City, MD for the past 9 years. Ross helped transform the state of the physical education at Waverly Elementary School by successfully winning various local and national grants to bring a variety of technology into the program. He also successfully advocated on behalf of his students to get a new gymnasium built to address the increasing enrollment numbers his school is experiencing. Ross is also very active on Twitter (@Mr_C_PE) as he works to spread the love for quality physical education and was recently asked to join the prestigious #ESPEchat Team (https://espechat.weebly.com/).
View More Author Articles