No Spotter, No Problem

Hi, Jeff Reinardy, strength and conditioning coach at Winona State University. Again, we’re in month four now of COVID. So, you’re going to see a lot of face masks right now. When we have people in the weight rooms that we’re supervising face masks are a must. You must constantly have that in mind. So, if you’re a supervisor, whatever make sure and I’m sure you’ve already been told this, make sure you’ve got a lot of these in hand. I’m going to set it aside for right now simply because trying to speak with that is challenging, but we’re going to cover a couple different topics real quick today.

First, we’re going to talk about some functionality, how we process all our athletes through the facilities. And we’ve got two different examples that we’re going to use. Then, we’re going to go through some movements that you can go through if you don’t have any spotters. And I’ll explain that a little bit.

Safely Processing Athletes Through the Facility

So, how do we get our athletes through our weight room? Well, there’s two methods that we’re using right now.

The first one we have at our high schools that we oversee is we have three different locations for them to start in. So, we’ll start a group on the top of the hour at 7am, and then we’ll start with a warm-up. We have a gym area that we’re able to do warm-ups in.

After 15 to 20 minutes of that, they’re going to shift over to the weight room. When they’re in the weight room, then that will be a section of time, which is about a half an hour, maybe a bit longer. And then we shift them over to a third location where we do our core work or our abs. In the meantime, every half an hour, we’ve got a second group coming in. So now we vacated the gym space for the warm-ups. Now that second group can start in that space, and we just do a simple rotation. Now you’ll probably have to have at least three personnel on hand to be able to do that type of thing. But it’s worked out very well for us. With our space requirements, we have our groups somewhere below 20 per group, but it’s worked out well.

The second example is that we’re going to do an opening of our facility before long and we’re doing a reservation system because we’re kind of a dual process. We are an athletic weight room as well as a general student weight room for university. So, what we’ve gone to is a reservation system. That way we can limit how many numbers are coming in, what time they’re coming in, what time they must leave, giving us time to clean up, do those types of things.

For example, a person would go on and they reserve a power rack. They come in, and for that chunk of time, whatever it might be, they get it, they can be at that power rack and really have very limited movement outside of that. So really, it’s still very restricted. Our numbers for us will be far less than 50%, even a little bit less than 25% of our overall capacity. We’ve got a big room that can hold almost 200. We’re going to limit it into the 30s. So, it’s really reducing it significantly. We do the same thing with our cardio areas, but we’re doing a reservation system. We think that that will be successful. It will stagger when people can come in as opposed when people are done with their workouts and will also give us time to go through some of our cleaning.

Safely Move With No Spotter

So with that being said, the next thing that we’re going to do that we’re struggling with as a strength conditioning crew is how do we get our workouts to be the level that we like them to be—get the intensity that we’d like them to be. And yet, we can’t have any spotters. In both the high school and at our university, we’re going to have one person per rack or per platform. So again, the idea of spotting somebody goes out the window. A couple of movements I’m going to show you we can use (not necessarily instead of but at least as something) as a tool that you can have in your drawer that will be helpful.

So first one I’m going to go through is what we call a floor press. Now you can do this in lieu of a bench press. You can handle a pretty good amount of weight, basically, whatever the person could put on the bar is something that they might be able to handle. I’ll go through that really quickly. We obviously drop the same catches down on low silver bars and a low position, we’re just using the floor as opposed to a bench at this point. We’re just going to bring the bar up—0kay, bring it down. Your elbows will make contact, you’ve got to control it down. You don’t want your elbows hammering down real hard. You got to make sure it’s a good controlled descent. And then you can drive the bar up. A simple floor press—you can still get a lot of great work out of that.

The other thing you’re going to be smart to use is a lot of dumbbell stuff. Mix in as much dumbbell things as you can. Again, you don’t need a spotter, they just must make sure that the area around them is clear and safe. So, if they’re down and they’re dropping those dumbbells that they don’t come in contact. I’ve had it before where somebody else’s dumbbells were there. They set their own hand in the center of the dumbbell right on the dumbbell that was on the floor, and we had a significant issue with the hand. So you want to make sure that all those things are clear, and that it’s a good and safe area. But again, if they need be, they can bring them down and just kind of go dump, dump, if that’s the case that they can’t be spotted, which is where we’re at right now.

Another movement is the same one as a floor press. If you don’t happen to have a lot of racks, but you’ve got some bars, some bumpers, or some steel plates, a typical size bumper plate is going to give you between eight and a half and nine inches of clearance. For most persons that’s going to work. For some of the big guys it’s going to be a little bit more challenging. So, there’s a couple different ways you can look at it. But when I’m doing these, if I’m by myself and I don’t have a spotter, I can literally roll over, bring it to my hips. From here, I can just pop it up, use my hips and pop it up, and then I’m in position to be able to do the number of reps that I want. Set the bar back down. Roll it, slide out from underneath, and it works out well.

The last thing we’re going to go to, and it seems very common sensical, but again, these are things that people just haven’t done for a long period of time. So, it’s just kind of renewing that idea again. It’s really being smart about using your safety catches. Typically, they sit in the lowest spot and nobody ever touches them. But make sure that, if you’re going to do some squatting and those different types of movements, make sure that you have the safety catches in a great position. For me, a good point of reference for a lot of people is just at the top of the femur where it kind of goes into the hip. Set the safety catch right in there. That way, if you’re doing the movement, and you suddenly get to the point where you can’t stand up before. You’re right there. Get out from underneath if you need to. So again, make sure they’re set correctly so they’re not going to pin their nose to the floor, be able to hurt themselves in that situation. But you can still put some weight on the bar, you can still challenge yourself. You can still get in a situation where you’re going to push yourself even without those spotters. 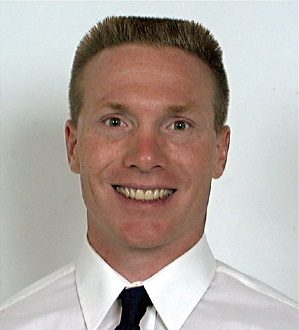